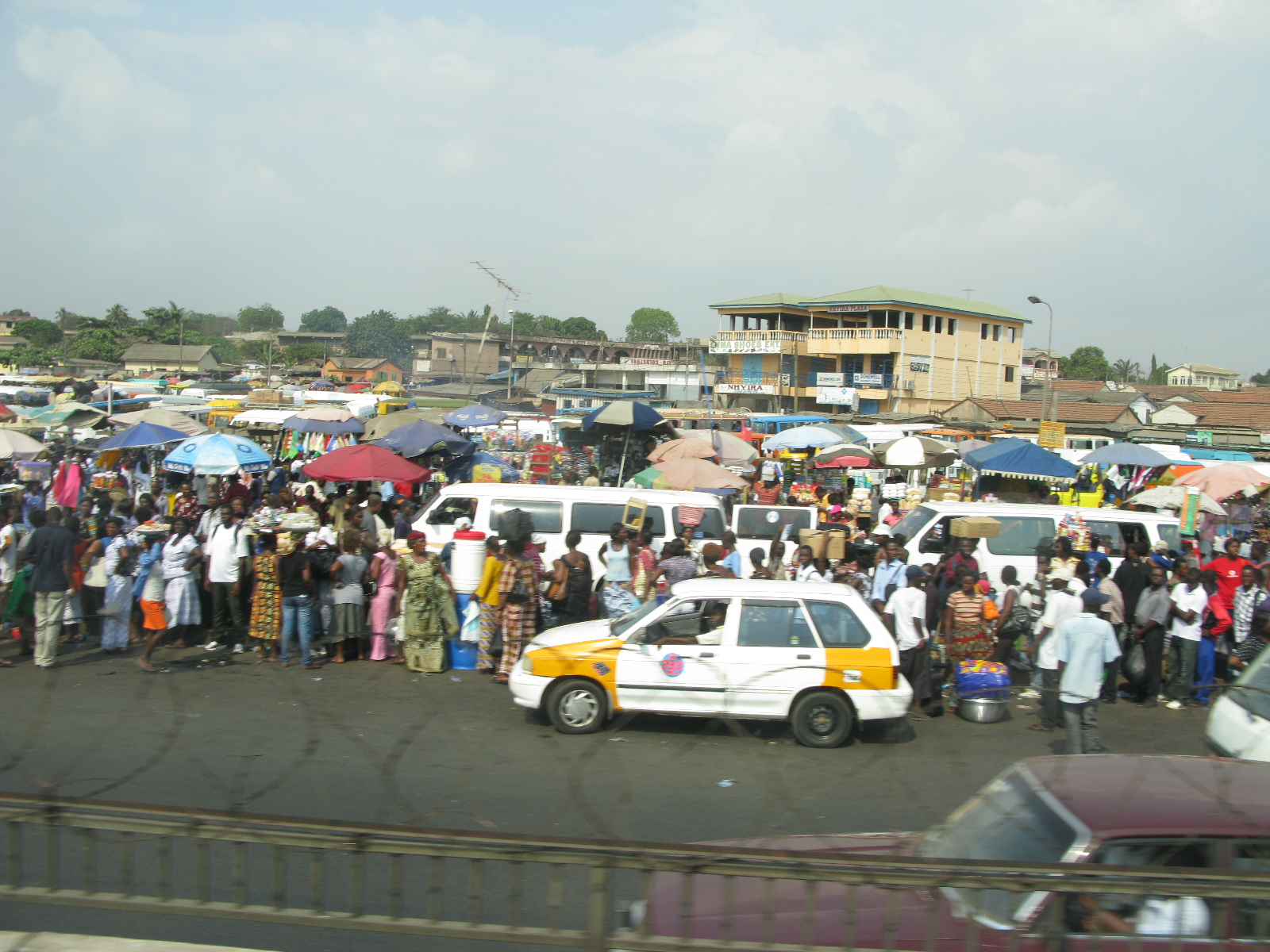 The following presents an overview of MCI's approach, within the context of the growth and challenges facing Accra.

With an annual growth rate of 4.3 percent, and accounting for over a third of all manufacturing output and a tenth of Ghana’s GDP (UN HABITAT 2009), Accra is emerging as a key economic hub in the Economic Community of West African States region (ECOWAS). Ghana’s capital has drawn a range of international, regional and domestic investment in the banking, finance, real estate, transport, ICT and service sectors, together with a steady stream of entrepreneurs looking to capitalize on opportunities for establishing complimentary services and migrants seeking work opportunities. Such opportunities have facilitated rising economic fortunes for many households across income lines, and steady improvements in physical infrastructure provision have helped retain growth.

Despite this impressive development, Accra continues to face significant challenges in offering equitable and reliable access to municipal, economic and social services for the estimated 60-70 percent of its residents who live in low-income, densely populated communities. Ad-hoc physical development continues to outpace spatial, infrastructure and economic planning, and many low-income, high-density communities are not linked to “formal” infrastructure services.  Un- and underemployment, urban poverty, environmental health risks and poor access to sanitation services remain major fixtures in several Accra neighborhoods where the human potential is great and growing, but untapped.

Mindful of this condition, in 2010 the Accra Metropolitan Assembly (AMA) invited and welcomed the Millennium Cities Initiative and the Earth Institute to an expansive collaboration under the Accra Millennium City program. Through dialogue, research and advocacy, MCI worked with the AMA, local NGOs and civil society groups to develop context-specific interventions aimed at attaining the Millennium Development Goals alongside goals created by the target communities themselves.

Known as one of Africa’s leaders in promoting democratic institutions, Ghana hosts numerous multinational firms and continues to attract foreign and domestic investment, the overwhelming majority of which is headquartered in Accra.  This sub-Saharan capital’s phenomenal physical and economic growth stands in dramatic contrast with its simultaneous increases in urban poverty and environmental health risks. Further public sector investment in municipal infrastructure is expected as following new revenues from recent offshore oil production reaches the national treasury, and analysts are optimistic that Ghana can become a middle-income country within a generation – a designation that would benefit Accra at least as much as the nation as a whole.

Yet there are conflicting dynamics to the story of urban growth in Accra.  In assessing progress towards MDG Goal 1, Accra was found to have experienced an increase in poverty incidence, from 4.4 percent in 1998-1999 to 10.6 percent in 2005-2006, going against the prevailing reduction in poverty in most of the rest of Ghana during the same period (UNDP 2007).  Moreover, full productive employment remains elusive for many in the city: the 2000 Census estimated a higher unemployment rate in Accra than in rural parts of Ghana (GSS 2000), especially for youth, even more so for young males. Further, as MCI’s recent research illustrates, many of the residents in the Millennium City target communities, particularly young adults, continue to face significant challenges when seeking employment and/or business opportunities.  Scant employment opportunities in the formal economy have resulted in more people entering the informal economy, which has its share of success and challenges. MCI’s research illustrates that many micro-firms are stuck in survivalist mode, often in oversaturated services and with little to no access to technological innovation, training or startup/expansion capital (see Earth Institute 2012a; Earth Institute 2012b).

In assessing progress towards Target 7.D of MDG 7 — significantly improving the lives of at least 100 million “slum” dwellers by 2020 — there is ample evidence to suggest that in Accra, underserviced, low-income, high-density communities have expanded. The Accra Metropolitan Assembly estimates that there are now 29 “squatter” and “slum” settlements/neighborhoods across the city (AMA 2010).  Several such communities, such as Old Fadama, Nima, James Town and Chorkor, have experienced population surges, both from natural growth and in-migration, putting additional strains on already deteriorated housing and infrastructure.  Meanwhile, insufficient livelihood opportunities have constrained residents’ abilities to invest in upgrading housing and adequate amenities.  Unsurprisingly, demands for improvements in municipal services overwhelm the municipality’s capacity to provide them at appropriate levels.  Assessments conducted by MCI and the University of Ghana have shown severe conditions in environmental health, with residents in poor communities trying to cope with contaminated groundwater and piped water, lack or absence of sewerage services, extremely inefficient solid waste management and pollution of waterways (MCI 2011, 2012; Oteng-Ababio, Melara Arguello and Gabbay, 2012; Owusu, 2011).  All of these conditions reflect institutional, financial, technical and participatory constraints in the urban planning and management process.

OUR OBJECTIVES AND APPROACH

Since the launch of the program in 2010, MCI’s chief aim was to collaborate with all relevant actors in the urban development process, as well as with experts across the Earth Institute, to identify measures that might be taken to facilitate meaningful, lasting improvements in living conditions and work opportunities for residents of Accra, while making inroads into learning how such measures can be taken to scale in other cities in Sub-Saharan Africa and beyond.  This endeavor called for a focus on planning processes, which could be innovative or simply a refining of established planning methods. For the first two years of the program, heavy emphasis was placed on community upgrading, environmental health and local economic development.

Our partner was the AMA as the principal local government actor and our host in Accra.  In MCI’s research, we worked with the AMA to develop a suite of new information and advice in the form of scenarios that can inform the metropolitan authority’s planning and implementation processes.  Our work can also be used by local NGOs, civil society groups and community organizations.

Our entry point to any issue addressed in Accra opened with a scoping study of the problem at hand in the target community, including an on-site assessment. We spent as much time as needed on site to get an appropriate “feel” for the community and the particular challenges at hand. This approach ensured our realistic understanding of the problem and any previous measures taken to mitigate it, so that there is no need to ‘re-invent the wheel.’

A critical early step in our projects was to try to establish sincere and effective dialogue among all affected stakeholders by ensuring that every interested party had an opportunity to take part in the deliberation process. The list of relevant stakeholders includes:

Every stakeholder’s perspectives and expectations regarding a potential project were documented, and we advocated for managing those expectations as mindfully as possible during the research phase and in the case of any subsequent interventions. Such a process is rarely straightforward and called for flexibility and adaptability in the dialogue process.

We employed the necessary suite of analytical methods for our assessments, including:

Dissemination of findings and outcomes

Once our assessments and recommendations were finalized, we submitted them first to the AMA for an internal review, after which our work was reviewed by the relevant community leaders and organizations, who/which may respond with their comments and/or validation. Our reports were then more widely disseminated, leading to discussions regarding which interventions might take place in what time frame and how MCI might most effectively assist in facilitating the process.

Bibliography, maps, research articles and field-based studies can be found at Accra Research.